I don’t have much to say right now, but I hope that you’re having a happy Halloween. 🙂

This is very cool.  I never thought what a CD would look like at high speed…

Last night RPG Maker MV was released to people who preordered via the website last night.  Needless to say…  I have been having a bit of fun with the new character generator.  Too bad they don’t allow making taller ‘RPG Maker XP’ style characters, though the new sprites do look better than the ones in VX/Ace.

Today, it’ll be released to everyone at 10:00 AM PST, I’m looking forward to seeing what people make with it. (and seeing what I can make too)

Well, that’s all for now, Have a nice day.

Well, that was cool.  Have a nice day.

Evidently, Microsoft has started making Windows 7/8.1 machines upgrade to Windows 10 without any input from the user, even showing the update on domain-connected computers, according to one redditor (As far as I know, this hasn’t appeared on any machines at my workplace, so I’m not going to say anything about that…)

Part of me thinks that Microsoft is pushing Windows 10 onto people who have disabled or removed the ‘GWX.exe’ which displays the ads for Windows 10, as those people appear to be the ones getting the forced upgrades.  If that is the case, I wonder if Windows 10 will be pushed on everyone around the time that the ‘Free Year’ is up.

From what I’ve seen, Microsoft *REALLY* wants everyone on Windows 10, the messages on my Windows 8 laptop have been becoming a bit more… pushy?…  essentially telling me that I have to upgrade soon, but so far it hasn’t forced anything on me.  The constant ‘Upgrade now!” messages have begun to leave a bad taste in my mouth though.

For now, I plan on keeping Windows 7 and 8 around, as both are still useful.  Also I miss some of the customization options that Windows 7 (and older) had.  No decent transparency, and no color customization beyond titlebars isn’t nice.  At least Windows 10 will have titlebar customization again soon… yay…  At least the windows won’t need to be pure white any more.

Click here to see an interesting article about this issue.

I’ve used Windows 10 for quite a while, and today a new ‘Insider Build’ was released, which finally re-introduces coloured title bars.  Windows 10 has really made me dislike pure white screens, because there are far too many of those in the OS.  Sure I could have used one of the ‘High Contrast’ themes to get the look that I wanted, but doing that causes other issues in the appearance of the Operating System.

Windows 10 is many times faster than windows 7, and the new task manager, which was introduced in Windows 8, is many times better and more informative than the older one which Windows 7 uses.  The start menu has more features than it did in Windows 7 or 8.1, I’ve managed to pin some document folders to the Windows 10 start menu, which can be very useful.  Cortana appears to be fairly useful too, though I haven’t made much use of that feature.

On the other end, some of the new ‘Universal App’ stuff has made the operating system feel a bit more unstable.  Things like the start menu not appearing when you click on it can be very aggravating.  Also for some reason I’ve had the sound system fail on two different Windows 10 machines in one day.  In the end both times it appears to have been a larger issue at hand, as not too long after the loss of the sound system, other applications began to have errors, requiring a forced restart on both machines.

In the end, Windows 10 is a good operating system, it’s good enough for most people, though it just feels that the new ‘Universal Apps’ can be buggy at times.  I still prefer Linux (Even though I haven’t been posting much about Linux recently…), but I’ll use Windows 10 without any major complaints.

Well, I don’t usually preorder software, but I felt that it’d be a good idea to get RPG Maker MV, I like that type of software, and want to eventually make a complete game of my own…  If you want to take a look, you can click here to go to their site.  I’m still not very fond of the ‘chibi’ characters introduced in RMVX, At least I can use sprites made for RMXP as they look a lot nicer (Too bad there aren’t too many available, sadly)  So far, I’m torn between VX Ace and RPG Maker 2003 as being the best RPG Maker available, I’m sure that MV will probably beat VX Ace (if for nothing else the cross platform compatibility.)

Here’s a link to their intro video.

You can also get RPG Maker MV at their Steam page.

It appears that someone has purchased the AdBlock extension for Google Chrome from its original owners.  There are some articles that have popped up that say that it has been purchased by the owners of the AdBlock Plus extension, which seems to be the likely case, as there is a link to the ‘Acceptable Ads Program’ page on the AdBlock Plus site.  I personally don’t have any issues with ‘Acceptable Ads’, even though I do run adblockers.  If your site doesn’t have annoying ads I will generally disable adblock.  If I end up being redirected to a different site, or am subjected to an ad that plays audio, I will make sure that adblock is enabled on sites where things like that happen.

Oh, and if you want to see the prompt that shows up in Chrome, you can see it in the image below. 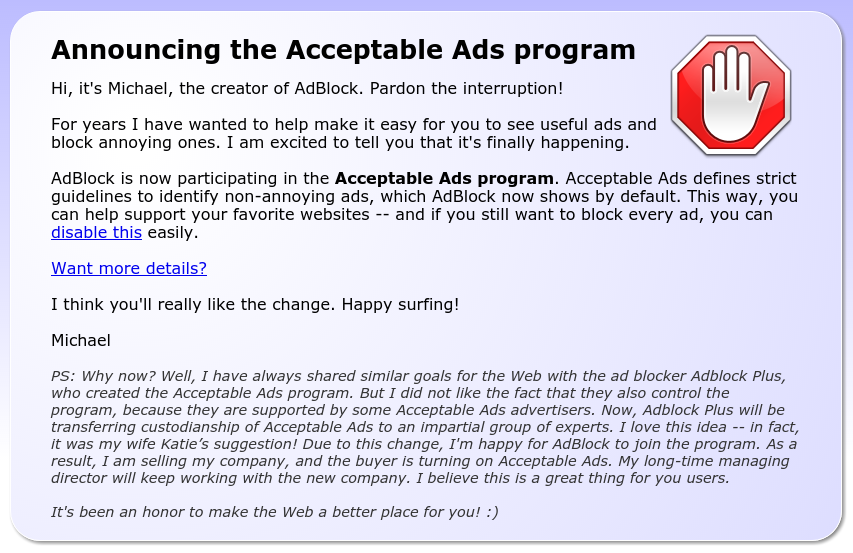 If you click on the ‘Want more details?’ link, this’ll pop up.

That’s all for now, have a nice day.