I find it interesting that Palmer Luckey said that Linux support is on their roadmap, He also had some … choice words on Apple…  Well, from what I’ve seen, Apple computers aren’t built to play games, so it does make a bit of sense, most Macs don’t have the hardware to push gaming VR headsets.  I’ve also seen that many PCs are also in the same boat, my older gaming desktop probably won’t be able to push the CV1 well in games, it already was having some trouble with the Oculus DK2, and it was a decently high-end machine when I built it back in early 2011.

It’s nice to know that Linux is ‘on the roadmap’, which means that they may start working on it before too long passes, though as far as I’ve seen, a roadmap doesn’t mean that it’ll be coming soon, seeing as they dropped Linux and Apple like hot potatoes a while ago.   On another note, it appears that the Vive will have Linux support at launch, and I believe that OSVR also has Linux support, though OSVR doesn’t have many games from what I’ve heard.  Maybe I should look at getting one of those at some point.

Here’s the string of tweets from Palmer Luckey, Click here to read the entire thread. 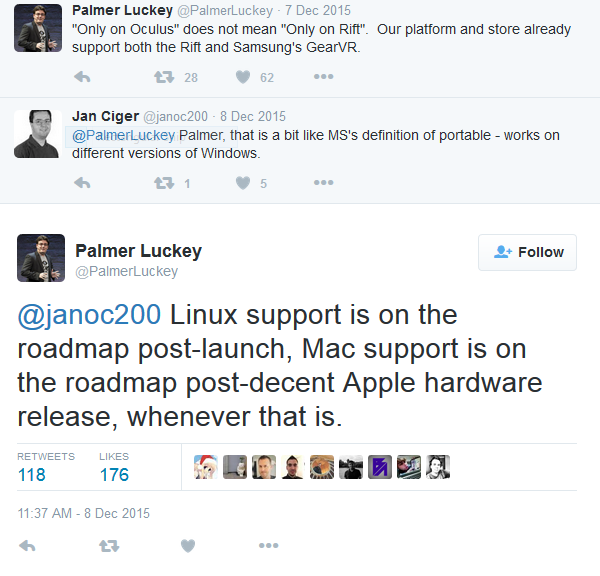 Well, that’s all for now, have a nice day.