There have been several threads on Reddit over the last few days about Windows 7, and in some instances, Windows 8.1 upgrading to Windows 10 automatically.   From what people are saying, Windows will restart suddenly and the Windows 10 install will start almost immidatley.  I have taken a look at my Windows 8.1 laptop and it appears that the upgrade to Windows 10 is listed as an ‘Important’ Update, not an ‘Optional’, or ‘Recommended’ update.  Interestingly when I was checking that on my Laptop, I got this message at the bottom of my screen… 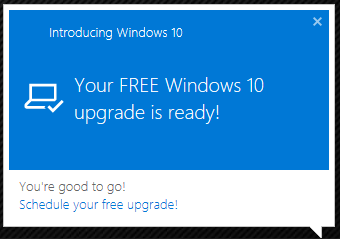 Once I clicked on it, here’s what I saw: 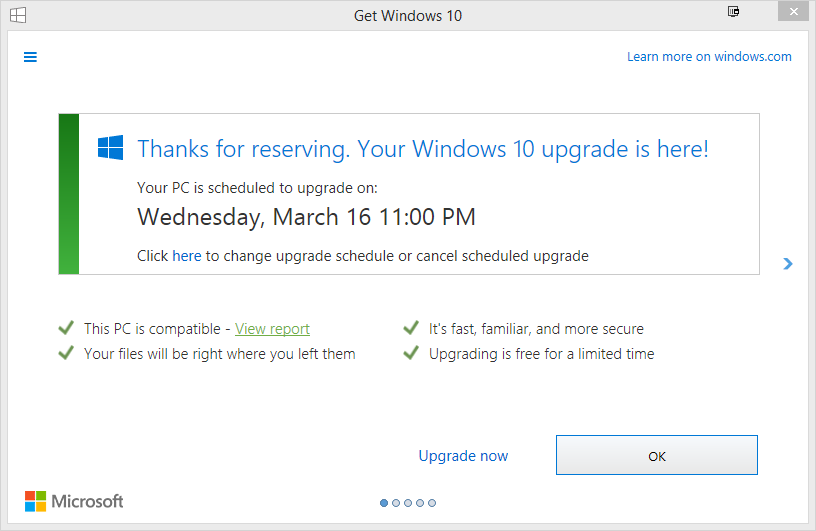 So, evidently, my Laptop will be upgraded to Windows 10 on the 16th, weather I like it or not, well probably the 17th as the laptop should be in sleep mode at 11 at night…  I have nothing against Windows 10 itself, It’s better than Windows 8.1 and faster than Windows 7. (Though I still like the appearance of 7 far more than 8, 8.1, or 10)  I really don’t like how Microsoft is pushing Windows 10 out though, tons of nag prompts are not nice, and people don’t like having their machines change abruptly.

Also from what I’ve been reading, some businesses are seeing their machines upgrading as well, often breaking their POS machines, and machines that have software that doesn’t work properly on Windows 10.  The unexpected downtime can also cause issues as well.  At my workplace we’ve done the steps to make sure that this doesn’t happen to us, but I don’t hold much hope for our Windows 7 domain to stay on Windows 7 for much longer, weather we like it or not.

I can see why Microsoft wants Windows 10 pushed out, it’ll make it much easier for them when they only have to patch one OS, but they can’t stop patching Windows Vista, 7, and 8.1 until their End of Life dates come.  Vista will be at EOL soon, but 7 will still be around until 2020 and 8.1 will be around until 2022.  If they try to kill those OSes before the EOL dates, I’m sure that there will be some lawsuits.  Businesses and some people don’t like change, or can’t upgrade yet thanks to older programs which may not work on Windows 10.

Oh, and one sidenote, Daylight Saving time is starting tonight, we all have lost an hour of sleep.  Good thing I shouldn’t have to run much tomorrow/today.