Here’s a neat video, I do hope that we’ll start going into space more in the near future.

Here’s a handy cheat sheet from the XKCD Webcomic. 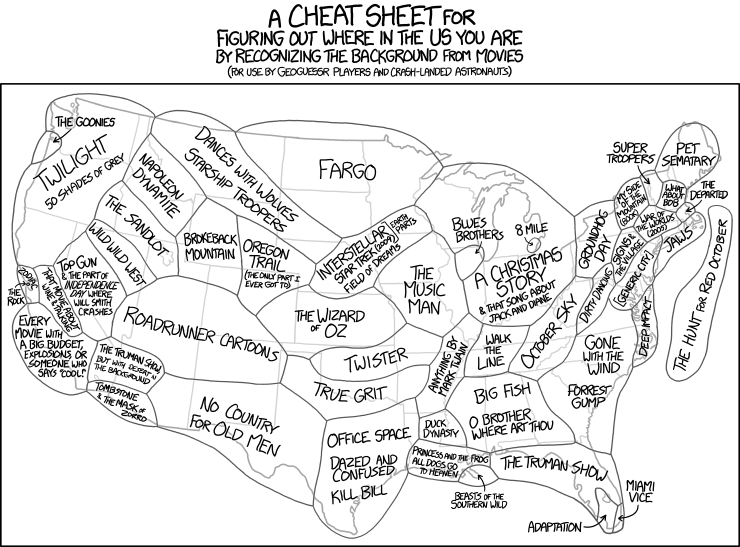 It looks like I live near the border of Fargo and parts of Intersteller/Star Trek and Field of Dreams.  Also some of the locations are from media other than movies, such as the Oregon Trail, or Roadrunner cartoons.

Click here to go to the large version of the image.

This is an interesting video, which goes over ten times that the Simpsons predicted the future. There is some interesting stuff in this video.

Here’s something that I found interesting…

It’s nice to visualise what percentage of people lean more for one political party than the other one, I wonder how large their pool of participants is…

Just a small post for today, have a nice day. 🙂

Here’s an interesting video that I found recently…

This is Water from Patrick Buckley on Vimeo.

Not much to say, but I’m working on making new content for the site again.

Well, this appears to be the last time that this will happen for a while, since there’s only 12 months in a year 🙁

Tomorrow sees one of the most pivotal pieces of internet legislation pass through the halls of power in Washington. The ‘Stop Online Piracy Act’ SOPA bill, combined with PROTECT IP Act, seeks to give the US Justice Department the power to force Internet Providers into blocking access to any website that is suspected of hosting or linking to copyrighted material.Provision for ‘going after’ ‘disputed sites’ hosting companies; search engines that link to them; payment services that support them, and other ancillary services will also be granted through the act.

via Tomorrow The Internet Will Begin to Die.

So basically, any corporation could yell out ‘Copyright Infringement!’ to any website on the ‘net, and then the site will just disappear.  It doesn’t seem that it’ll matter what site they’re talking about, any site can be brought down, by removal of it’s name from all of the DNS servers in the US.  Any US Based site taken down this way will remove it from the whole world, and it could possibly happen to some sites based in other countries. (though harder, and it’d be less likely to happen outside of our controllable area.)

Small and large businesses that are based off of the ‘net could just vanish and die, I must say that this cannot happen, if it does, there will be some huge, bad, changes to come.

And apparently the USA is best at producing…. *dramatic drumroll*

In my opinion that isn’t good for this country…

Here’s the link, I must say that it’s a neat thing to look at.

Because Every Country Is The Best At Something

I wonder if anything will happen…

and yes, I’ll get back to computers on Sunday. 🙂